Scotland is a land of traditions and the military tattoo is one of the most beloved of them all --- beside the great outdoors, scotch, haggis, and tartans! To keep things simple, today, a military tattoo refers to an elaborate musical performance by the armed forces, not to people getting inked!!

How it All Started...

The name military tattoo dates back to the Thirty Years War, one of the longest and most destructive conflicts, in European history that lasted from 1618 to 1648. It was fought for the usual reasons, dynastic, territorial, commercial, and religious rivalries. The Dutch phrase "doe den tap toe," which translates to "turn off the tap" is the key to the origin of the military tattoo. During this war, Dutch fortresses were garrisoned with troops consisting of Scottish, English, German, and Swiss mercenaries that were commanded by the Dutch. Trumpeters and drummers from the garrison were sent out into various towns every night to inform innkeepers to stop serving ale and to instruct the soldiers to return to their garrison!

Eventually, tap toe became tap too and evolved into tattoo, the term we use today. Over the years, the Military Tattoo became a military tradition that included music at 9:30 p.m. and at 10 p.m. for many of the armed forces. In the late 19th century, many military and garrison towns, in Europe and the United States, put on a military show during the summer months. During WWI and WWII, many military musical shows were held throughout the world with one of the most popular held in Scotland, where it is proudly held to this day. 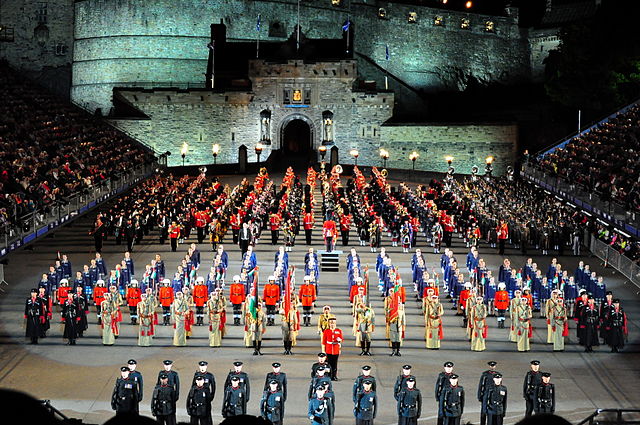 The first Edinburgh Tattoo, now called the Royal Edinburgh Military Tattoo took place in  1950 and was inspired by a simple show called "Something About A Soldier," at the Ross bandstand, that is still there, just below the castle. The first producer was Lieutenant Colonel George Malcom, of Poltalloch.  That year after producing the show, "King's Men," he was invited by Lord Provost of Edinburgh, Sir Andrew Murray, to present a military show, to be called, the Royal Edinburgh Military Tattoo. The rest is history!

Today, the Edinburgh Tattoo is set against the magnificent and ancient backdrop of the Edinburgh Castle. The Royal Edinburgh Military Tattoo is the largest and best-known in the world. There are so many highlights to this event---almost too many to list! Just imagine hearing and seeing the traditional sounds of Scotland from drums, pipes, and bagpipes with the embellishment of the modern features of the Armed Forces. The highlight is that you will see some of the world's leading armed forces and cultural performers sharing through the spoken word, song, writing, music, and dance; amid the historic backdrop of an ancient city that is crowned by a castle. This is an event of a lifetime. 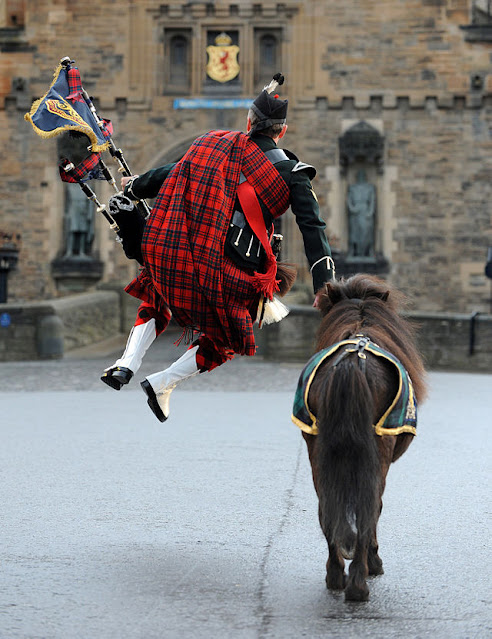 BraeVal has a great deal in common with Scotland's Military Tattoo - and all others,  -  we celebrate pride and patriotism, culture, and history through the unifying power of music and the timeless look of tartans.